Would you want to live your life trapped in a room the size of your bathtub? AAA CEO Robert Darbelnet probably wouldn’t, either.

So why is AAA promoting SeaWorld—where highly intelligent orcas are forced to live in tiny tanks and perform silly tricks to entertain humans?

It’s been more than four years since the release of the documentary Blackfish—whose „star,“ Tilikum, died after 33 years in a concrete tank—but orcas at SeaWorld are still swimming in endless circles and breaking their teeth by gnawing in frustration on the concrete corners and metal bars of their tiny tanks. Other dolphins are still being impregnated, sometimes forcibly after being drugged; a polar bear died after her companion of 20 years was torn away from her; and three infant marine mammals, including a 3-month old baby orca, died in just three months. 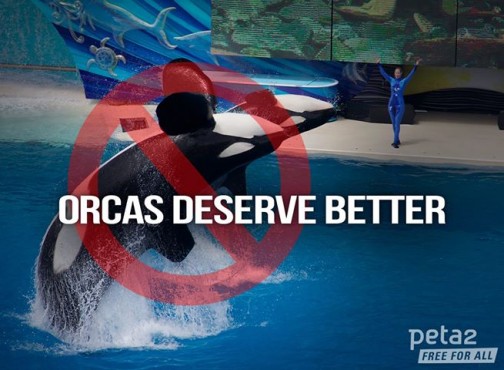 SeaWorld deprives orcas and other animals of everything that is important to them, and the unnatural conditions in SeaWorld’s chlorinated, barren tanks drive them crazy.

Tell Robert Darbelnet to take a stand against SeaWorld’s cruelty to animals by ending its promotions of SeaWorld! And don’t forget to follow up with a polite call to AAA at 407-444-8402 urging the company to end its affiliation to SeaWorld. (AAA’s office is only open from 8:30AM ET to 5:15PM ET.)