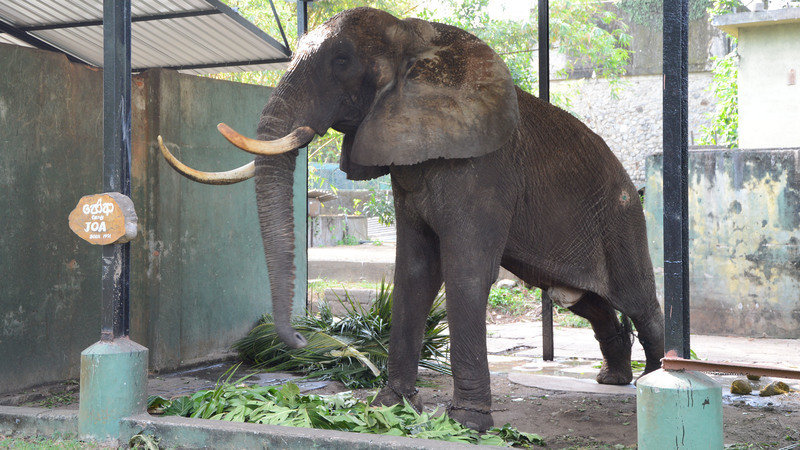 Our last update featured a photo of the Dehiwala Zoo’s bathtub-like sea lion “enclosure” which caused a public outcry. Thanks to your efforts, the sea lion was moved by the Zoo authorities to the performing pool until the new permanent enclosure is ready. We thank you for showing your outrage, and for sharing our update widely. Your actions helped to somewhat ease the terrible suffering of the Zoo’s sea lion.

We are reaching out to you today to bring to your attention the plight of Joa, the lone African elephant at the Dehwala Zoo. Media reports that he has lived at the Zoo since he was 3 years old. As he could not be controlled by bullhooks (which are used by the Zoo’s mahouts to control the Asian elephants), he has been kept chained in place on both front and back legs for more than 20 years!

– has not been taken for a walk or given exercise in more than two decades because the mahouts at the Dehiwala Zoo do not know how to handle him. The only “exercise” given to the Asian elephants at the Zoo – who are also kept tied up all day – is the grotesque and dangerous elephant circus act (called the ‘Elephant Dance’) for which the Asian elephants are untied for an hour a day. As Joa is not part of the performance, he does not appear to be ever untied and given any form of exercise.

– does not get to interact with other elephants as he is kept separated from the others by a wall.

– was hit with stones by the mahouts to make him obey orders to crouch down for baths, until this treatment was exposed by the media in 2014. Since then, it does not appear that he is being washed properly, and as such, he has developed a severe, untreated skin infection on the upper part of his body.

– has spent his entire life standing or lying on a concrete slab in a shed, chained on two legs since he was 3 years old.

20 years is a long time to spend chained to one place. Many who visit Joa observe that he appears to be severely depressed. Due to pressure by animal welfare organizations, plans are apparently underway by the Dehiwala Zoo to send Joa to the Hambantota Safari Park. We fear that this move will not improve the quality of his life as he will still continue to live in solitary confinement and without proper care by trained staff.

The only responsible solution for Joa is to send him to a proper sanctuary in Africa so that he may spend his remaining years with other African elephants in the care of trained staff.

Please continue to share this petition as well as the sister petition by the Otara Foundation as we work together to mount pressure on the Sri Lankan government to shut down the Dehiwala Zoo: https://www.otarafoundation.com/?actnow=actnowtofreetheinnocent

If you wish to send your own appeal on behalf of Joa to the Dehiwala Zoo authorities, please contact Acting Deputy Director Dammika Malsinghe and appeal to her to send Joa back to Africa as he has suffered enough in Sri Lanka!

Thank you for your compassion!